Gloomy end of life rather than happy?

“Depression is the leading cause of years lost due to disability.”

Depression in the elderly

It is difficult to obtain statistics on geriatric depression, as depression is underreported in seniors’ surveys, which makes it impossible to reveal the true extent of the problem. Old age is a period of loss and frailty (in terms of autonomy, cognition, motor functions, among others). It may well be that you know a relative, family member or loved one who experiences a mood disturbance and expresses sadness (or have you ever been depressed?). It is noteworthy that ladies are at higher risk, especially those with little social support and sleep disorders.

Probiotics in all this?

Scientific research has shown that the stool microbiota (yes, we’re talking about the faecal flora …) of people with depression was different from that of people in good mental health1. This being said, it is noted that the administration of the Lactobacillus rhamnosus and Bifidobacterium longum strains (as found in the Probaclac 50+ probiotic) would improve depressive symptoms2,3. It also appears that probiotics have the potential to reduce the risk of depression in individuals who are not depressed4,5. This is proof of the powerful two-way interaction between the digestive system and the central nervous system; our two brains!

What are you waiting for to do you good and to allow yourself to live long and prosper ?! 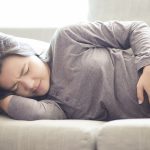 Next Story:
Health through the belly