Acne-prone skins, get your probiotics!

Skin is the largest organ of the body. Needless to say, that this site that constantly exposed to physical, chemical, bacterial and fungal irritants1. The healthy human dermis can produce an army of antimicrobial substances that play an important role in the elimination of potential skin pathogens2. According to statistical data, up to 12% of women and 3% of adult men suffer from adult acne (the problem is generally more serious in men), followed by 78% of pre-adolescents and 85% of adolescents are affected3. Acne is a skin condition that is more than a aesthetic concern, it can cause emotional damage, low self-esteem and even isolation3.

Several specialists in this field believe that acne is a visible manifestation of a systemic disorder, for the majority it would be one of these situations: insulin resistance, hormonal imbalance, inflammation, intestinal dysbiosis (a disturbance of the flora digestive), microbial colonization with the strain Propionibacterium acnes or a suboptimal diet. Factors influencing the onset of acne include: excessive sebum production, follicular hyper-keratinization (excessive cell production and dead skin accumulation) and then increased secretion of inflammatory messengers4.

The link between microbiota and cosmetics

There can be little argument that probiotics have a favorable impact on digestive functions. Several studies show that skin problems go hand in hand with an imbalance of the gut microbiota. Russian scientists have discovered this dysbiosis in more than half of their acne patients4. In addition, when their acne patients received probiotic supplements, they could celebrate a shortening of the duration of their skin treatments4.

An Italian study of oral probiotics Lactobacillus acidophilus and Bifidobacterium bidifidum supported the idea that these good bacteria represent an adjuvant to the standard pharmacological treatment of acne, working in synergy to combine their benefits5. Several dermatologists in Germany have been recommending the yeast Saccharomyces boulardii as a complementary treatment for acne. On the other hand, the topical application of probiotics has also enhanced the antimicrobial properties of the skin5. The results could reveal that Lactobacillus extracts were useful for reducing erythema and inflammation of the skin, also   enhancing resistance to bad bacteria and reducing the size of the lesions caused by acne2.

The medical advancement is to such an extent that the researchers evoke the existence of an intestinal-skin axis and suggest that certain bacterial strains are able to reduce the appearance of acne. Although the method explaining the therapeutic effect of probiotics on the health of the skin is not well known, it seems to be via the reduction of inflammation and oxidative stress4. Also, probiotics definitively act on the microbial flora of different areas of the body well beyond the digestive tract4. Finally, probiotics produce proteins that inhibit the bacterium P. acnes which causes much distress to dermatologists and all those who have already been confronted with acne5. Additional research will help us better understand the role that probiotic supplements and dietary modifications can play in the fight against acne, but it’s already promising.

True or false ? The use of probiotics to treat acne is a very recent scientific idea.

False! Physicians in the 1930s used cultures of Lactobacillus acidophilus administered orally to treat acne. Doctors John H Stokes and Donald H Pillsbury had already understood the gastrointestinal etiology of acne. It was only later in the 20th century that clinical studies on subjects began. 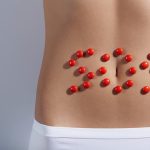